How to break your hips whilst in the car! - Drive skills 4 life

How to break your hips whilst in the car!

Balancing exams and learning to drive 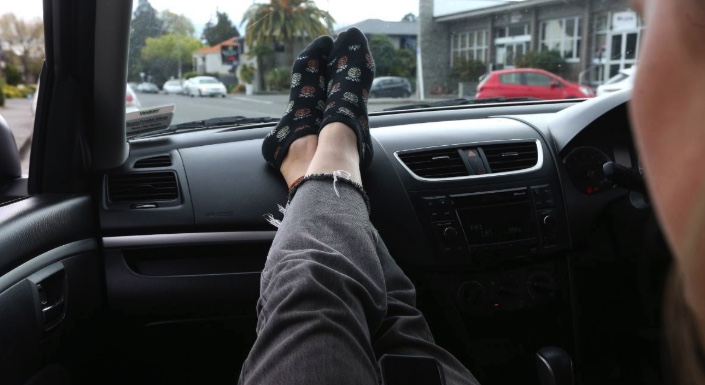 How to break your hips whilst in the car

The sun is shining and you’re out for a drive with a friend.  You start to feel a bit weary and think, I feel like a little nap.  I’ll just pop my legs up on the dashboard, recline the seat a bit and snooze whilst my partner drives.  Next minute, you wake up with a start and realise your legs have scissored outwards and you can’t move.  The pain is so intense you’re not sure how it’s happened; you can’t move. You look across at the driver and you can’t see them due to the exploded airbags.  Screaming takes over but no-one hears you.  You can’t find your phone, you can’t climb out of the car, you freak out wondering if the car is going to explode. This is how to break your hips whilst in the car 101! Have I got your attention now?

No one’s a perfect driver

For many years when on long drives or when its warm and sunny we can be rather relaxed and chilled whilst being a passenger in a car.  One habit that keeps coming up is resting our feet up on the dashboard, even sometimes out the window!  Sometimes if you’re sitting in the backseat, feet go up on the  back of the front seat.  I’ve never really understood the attraction, but I suppose different people have different ideals on what won’t happen. In reality, you can be with the safest driver in the world, no one is a perfect driver.   But, if someone hits you from the side, or the rear, or the driver accidentally tailgates someone and has to brake suddenly, this increases the risk of being seriously injured.

Stable condition doesn’t always mean back to work the next week.

Did you know that in Victoria every year we hear reports on news programs of passengers or drivers being in serious car accidents?  They usually say they’re in a serious but stable condition.  Stable can have many meanings after a car accident.  Most of may assume they’re stable, so they’ll probably be back on their feet in a few weeks and everything will return to normal. They more than likely won’t be back at work as early as you think. The real story behind stable lies in what happens as they slowly recover.

I know this for a fact as one of my TAC clients was involved in a car accident December last year whereby the car was clipped by a slowly reversing car and flipped over.  This wasn’t some small car either – a huge Toyota Hilux.  My client sustained serious injuries including a partially degloved left hand, a broken neck and heart damage.  It’s been almost a year and since coming out of hospital mid January and spending two months in a rehab hospital, my client is still enduring fortnightly sessions from a physiotherapist and monthly sessions from myself, which involves rebuilding their confidence to drive again.  Imagine not being able to turn your neck to the right, ever again.  That’s a huge blindspot and involves re-learning to have the confidence to drive again.

The stats speak for themselves

Claims that involve hospitalisation greater than 14 days over a five year period:

One stat that was very hard to get hold of was the average stay in hospital. Recently I spoke with two Occupational Therapists who deal with these injuries on a daily basis, they believe the number would average 30 days in hospital. Rehab stays follow and can be anywhere from 1-6 months in a rehabilitation hospital. Ongoing treatment anywhere up to two years and beyond, which is what the TAC portion of our registration is for.

Next time you are considering taking that nap, or just feel a bit uncomfortable in the passenger or back seat, ask the driver to pull over and stretch your legs.  The thought of broken hips is too painful to ponder!